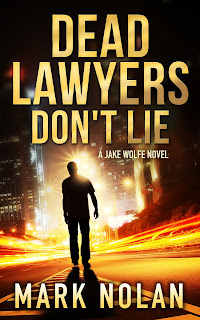 The killer aimed his weapon at the pregnant lawyer's rounded belly. He said "Bye-bye baby," and pulled the trigger. War veteran Jake Wolfe and his former military dog are targeted next. They must stop the assassin, or die trying. An action-packed thriller from beginning to end. Dead Lawyers Don’t Lie has been a #1 bestseller in Pulp Thrillers, and among the most popular books in Kindle Unlimited All-Stars.

Excerpt:
Jake Wolfe sat in his Jeep and witnessed the murder through his camera’s telephoto lens. He stared in surprise and disbelief for a long moment. As the other lawyers ran in panic, Jake made an effort to remain professional and detached. He’d seen people get hit by gunfire during his days in combat. Many of them due to him firing his own weapon. He took a deep breath and assessed the situation.

Judging by the sound of the suppressed shot and the direction and angle that it appeared to have come from, Jake figured that the shooter was probably up in one of the trees. He used his camera to scan the woods, and he saw a brief flash of light as the sun reflected off the glass lens of a rifle scope. Then he saw the killer in a tree, aiming the rifle right at him.

Not good, not good at all.

Jake’s reflexes had been trained by the military to pull a rifle trigger in this situation. His trigger finger pressed the camera’s shutter button instead and snapped a photo. One second later he ducked down to his right onto the front seat of the Jeep so he was below the dash and not exposed through the windshield. He waited for rounds to hit his car, seeking his body, but none came. Maybe the killer had decided to make a quick getaway. Or maybe he was just waiting for Jake to sit up in the driver’s seat so he could shoot him in the head.

Mark Nolan began his writing career as a successful entrepreneur who created news stories for businesses that were featured in The Wall Street Journal, National Geographic, Parade, Reader's Digest and The Associated Press. Nolan was born in San Francisco, grew up in the Bay Area of California, and has also lived in the Pacific Northwest and Hawaii. He has raised two great kids and one very smart retriever dog. Right now he's busy writing the next book about Jake Wolfe (Book 2), but he also tries to make time every day to answer emails from readers. You can reach him at marknolan.com/contact


Rafflecopter Giveaway
Posted by Elisha German at 12:30 AM