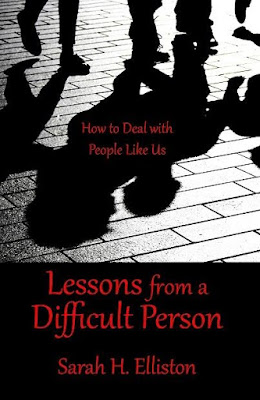 Elliston is a highly successful workshop leader and trainer, who offers wisdom learned the hard way—by experience – as well as through rigorous study and certification in many areas of professional training that aid her in her work -- Values Realization, Parent Effectiveness Training and Reality Therapy. She is a faculty member of the William Glasser Institute. Glasser is an internationally recognized psychiatrist and developer of Reality Therapy, a method of psychotherapy that teaches people they have a choice in how they choose to behave.

The methods Elliston offers in her book end the trauma and the drama, and minimize the possibility of confrontation. She gives YOU, the reader, the ability to take a strong, positive, confident—yet compassionate--stance with the “difficult person”—whether that is a relative, coworker, friend, one of your children or anyone else for that matter.

Elliston demonstrates how to:

Elliston lays out a proven script for peacefully transforming the difficult person’s behavior and the environment. She gives you the tools for successfully initiating and engaging in a conversation with a difficult person that would lead to change.

Sarah (Sam) Elliston is an expert in the art of Dealing with Difficult People. She is a top workshop leader and a member of the faculty of the William Glasser Institute, which espouses “Reality Therapy” to foster behavioral change.

But her instructional career began long before she even became aware that she was herself a “difficult person,” traits that began in Lincoln MA, where she grew up. For more than 30 years she has been teaching and training, first as a high school teacher in Ohio and Cincinnati—and then as an administrator in the not-for-profit sector.


Thank you so much for stopping by today to chat with me a little bit about your book!
Interview with Sarah H. Elliston, author of Lessons from a Difficult Person; How to Deal with People Like us.

1. Who or what inspired you to become a writer?
I have always been an expressive person; an extroverted thinker as one Meyers-Briggs trainer described me. It means I think out loud. While others think about what they are going to say, I say what I am thinking. When I was in school I was lucky enough to be required to write an essay every weekend for four years and my mother helped me. She found challenge in helping me figure out what I really wanted to say and how to structure the content so it would make sense. We had hard backed Thesauruses in those days, not a quick click of a mouse and word choice was very important. So, I had lots of training and help and I enjoyed it.
My grandfather wrote Geography books that taught how the physical geography of an area impacted the development of a culture which was a new concept at the time. I don’t know if I wanted to be like him but I liked having his books. At some level, he probably inspired me.


2. How did you plot the book?
This book started out as a workshop. After I presented the workshop people kept asking for more and I thought it would be helpful if I wrote down what I said in the workshop so they would have it as a reference. What I discovered was that I had to tell my story about my developing as what became a difficult person. I realized that this story was powerful in the workshop even though I didn’t dwell on it. People could see how a difficult person might NOT realize she was difficult.
So, I ended up writing a good deal about my childhood and my perception of my childhood relationships. I worked very hard not to blame others and take responsibility for how I developed. Adding the tasks from the workshop and some other exercises that I wanted to include was the fun part. Developing an outline for a conversation was a new twist; we hadn’t done that in the workshops. We did much role playing and practicing and I encourage the reader to do the same.

3. Who do you think your target audience is?
I wrote the book for all the people in the world who know others who drive them crazy but to whom they are uncomfortable saying something. I find very few of us do NOT have someone we would cheerfully strangle, if it was allowed. Difficult people are argumentative, critical, defensive, and they complain a lot. Names for them include: manipulative, passive aggressive, bossy, controlling, to name a few.
Our world appears to either avoid the difficult person or slams them in the face with criticism or a comment that feels like criticism. My goal was to provide a process to experience in preparation for a conversation rather than a confrontation.
As it turns out, many readers have self-identified as difficult people after reading the book so it turns out that the target is actually much larger. I hope the exercises in the book are useful for all the readers.

4. Isn’t it true that some people don’t want to change?
Unfortunately, there are some people who are getting what they want with what they are doing, so yes, they wouldn’t change no matter what is said to them. We only change when the pain of not changing is worse than the effort of changing. If someone’s behavior is hurtful to others and he still maintains he is getting what he wants, I would encourage him to look inside to see what he really, really, wants.
All of us need to be liked, loved and accepted in whatever world we live. It is a fundamental need of all humans. When someone is hurting others, and knows that others don’t like him, his primary need to be liked isn’t being met. In this case, a helpful conversation, might help him see that indeed, he isn’t getting what he really wants.


5. Why a conversation, not confrontation?

I see a confrontation as two elements slamming into each other. I would like to think that we can get someone’s attention without slamming that person. While a conversation can have the impact of a mental 2 by 4, it is really an invitation to look at what one is doing and its impact.
A conversation starts with:” When you this, it alienates the customer and we lose business. Do you know you are doing this? Did you know it has this impact? Is that what you want?”
The conversation continues by listening to the reaction and reminding the difficult person that he or she is not being fired or rejected. The conversationalist reminds the difficult person that he or she is valued AND asks again did he or she want this result?
A confrontation is: “You know you alienate the customers when you use that language. Stop doing it.”
In my experience, the conversation gets a more positive response and willingness to change than the confrontation.

Posted by Elisha German at 3:21 PM