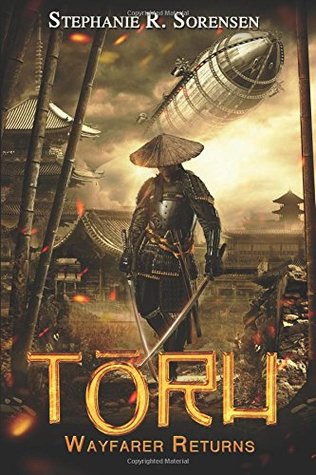 In Japan of 1852, the peace imposed by the Tokugawa Shoguns has lasted 250 years. Peace has turned to stagnation, however, as the commoners grow impoverished and their lords restless. Swords rust. Martial values decay. Foreign barbarians circle the island nation's closed borders like vultures, growing ever more demanding.

Toru, a shipwrecked young fisherman rescued by American traders and taken to America, defies the Shogun's ban on returning to Japan, determined to save his homeland from foreign invasion. Can he rouse his countrymen in time? Or will the cruel Shogun carry out his vow to execute all who set foot in Japan after traveling abroad? Armed only with his will, a few books, dirigible plans and dangerous ideas, Toru must transform the Emperor's realm before the Black Ships come.

Toru: Wayfarer Returns is the first book in the Sakura Steam Series, an alternate history of the tumultuous period from the opening of Japan in 1853 to the Meiji Restoration in 1868. This volume covers the year prior to the American Commodore Perry's arrival in Japan and follows the hero and his young allies as they lead Japan through a massively compressed industrial revolution, dramatically altering that pivotal moment in history.

While Toru and his dirigibles are fictional, the story unfolds against the backdrop of the 'real' Japan of that period, with historical figures and their political environment woven into the tale, staying true to their motivations and agendas even as the alternate history warps their actions, history and a few laws of physics. Underpinning the adventure plot is a young man's yearning for his father's approval and an honorable place in his world.

Review:
Steampunk reads are new for me. I'm not too sure how I fell about them but, in this story it worked. This story as a whole take you on a great and inspiring journey. The author does a lovely job of combining historical Japanese (Shogun era) and steampunk. This story was a bit slow in it's development but, I kind of think the author took her time (in a good way!) in letting the story unfold in a natural sort of way. I am impatient when it comes to slow beginnings in books though. The mysterious hero was a fun surprise that also added an element of romance to the story. Throughout the entire story there is a suspenseful feel because Toru returns to his homeland which is essentially forbidden because with Shogun Law, if you leave Japan's shores - you cannot return. This story evolves and grows into way I didn't quite expect but enjoyed. So far, I am liking this new series by an author that is also new to me!

I received a galley of the book in exchange for an honest review.

Posted by Elisha German at 2:57 PM