**Author Interview** Playing the Game by Lisa B Kamps **Review**

The arrogant hockey player can't hide from her,
the one person who knows him better than anyone else. Harland Day
knows what it's like to be on rock bottom: he was there once before, years ago
when his mother walked out and left him behind. But he learned how to play the
game and survived, crawling his way up with the help of a friend-turned-lover.
This time is different: he has nobody to blame but himself for his trip to the
bottom. His mouth, his attitude, his crappy play that landed him back in the
minors instead of playing pro hockey with the Baltimore Banners. And this time,
he doesn't have anyone to help him out, not when his own selfishness killed the
most important relationship he ever had.

Courtney
Williams' life isn't glamorous or full of fame and fortune but she doesn't need
those things to be happy. She of all people knows there are more important
things in life. And, for the most part, she's been able to forget what could
have been--until Harland gets reassigned to the York Bombers and shows back up
in town, full of attitude designed to hide the man underneath. But the arrogant
hockey player can't hide from her, the one person who knows him better than
anyone else. They had been friends. They had been lovers. And then they had
been torn apart by misunderstanding and betrayal.

But some
ties are hard to break. Can they look past what had been and move forward to
what could be? Or will the sins of the past haunt them even now, all these
years later?

Review:
This is the first book in this series and it is off to a fabulous start! Like I said in a previous review, I am not big on sport type books. For some reason they just aren't my thing. However, that said...I really enjoyed this book and am really excited that there is more to come! This story is about Harland and his struggles to get back into Hockey. He's crashed and burned but doesn't want it to be the end for him. His struggle is real. If he can't improve, his career could be done and over with. That said, I really appreciated Harlan's character and moral. Plus, aside from his career being in limbo, he wants to correct things with his ex girlfriend that did not end so well...but all the secrets...
Boy did this book take me for a ride! Lisa's writing style makes her story captivating. This book in totality was awesome.


I received this galley in exchange for an honest review.

Interview with Lisa B. Kamps
If you had a theme song, what would it be?
Honestly, it depends on my mood. But there are two that always seem to be at the top of my list:
Fight Song by Rachel Platten and…
Wait for it…
Fat Bottomed Girls by Queen!

A la Twitter style, please describe your book in 140 characters or less.
Okay, I'm really not that great at Twitter but I'll give it a shot:
#secondchanceromance #steamyread #firstlove #nevergiveup #loveconquersall #hockeyromance #alwayshopeful #friendstolovers
Did I go over??
What do you do when you are not writing?
Plan for the next book? Seriously, my mind is always going: thinking, dreaming, wondering, planning. Doesn't matter what I'm doing, there's always something involving writing going on in my head.
Except when I go into total slug-mode, which does happen every once in a while. If that's the case, I'm either literally doing absolutely nothing (I mean I literally turn completely OFF), or I'm either reading or playing SIMS. Hey, don't judge me J!
Is anything in your book based on real life experiences or purely all imagination?
Are there certain characters you would like to go back to, or is there a theme or idea you’d love to work with?
Do you have any advice to give to aspiring writers?
The best piece of advice I can give (and have given) any aspiring writer is one that's been around for ages: Just do it. Don’t think about doing it, don’t talk about doing it, don't dream about doing it. Just sit your butt down and get those words on the page. Talking is easy, but if you're serious, stop talking and just write. You can fix it later, worry about it later, angst over it later. But you need to get those words on paper first. In this case, actions really do speak louder than words.

Don't get so caught up in the rules that you end up hampering your creative flow. Yes, learn the rules, be aware of them, but don't let them rule your writing (or your creative process). There are so many rules out there that "they" say can't be broken. But guess what? They get broken all the time, and it works. Do what works for you, your story, your characters. Don't let the rules silence your unique voice. (Note: I'm not talking about grammar and punctuation--those are important. It's those other pesky rules, like don't write in first person, don't write about a sports hero, etc.)

Is there anything that you would like to say to your readers and fans?
To my current readers and fans: THANK YOU so much for taking a chance and joining me on this wonderful journey! It really wouldn't be possible without all of you! To those readers who haven't yet read my books: don't be afraid to take a chance! You might surprise yourself and find a new favorite author (if not favorite, then hopefully one you really like!).

Can you tell us about your upcoming book?
My next scheduled release is PLAYING TO WIN, The York Bombers Book 2.
We met Jason Emory in Playing The Game and he seems like your typical jock who plays just as hard off the ice as he done on it. He's single, hot, and completely free to do what he wants. And while he's not exactly self-absorbed, he doesn't really pay attention to what's going on around him as well as he should.
Yeah…poor Jason has no idea what is about to hit him after one particularly hot night with a stranger who seems oddly familiar.
This one is a steamy twist on your one-night-encounter, with maybe just a hint of Cinderella thrown in! PLAYING TO WIN releases on March 21, and is available for pre-order now. You can find the link here: http://www.lisabkamps.com/playing-to-win/ 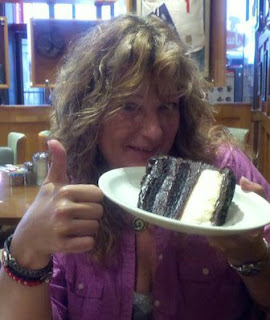 Lisa B.
Kamps
is

the author of the best-selling series The Baltimore Banners,
featuring "hard-hitting, heart-melting hockey players" (USA Today),
on and off the ice. Her firefighter series, Firehouse Fourteen,
features hot and heroic firefighters who put more than their lives on the line.
Her newest hockey series, The York Bombers, launches with PLAYING
THE GAME in February, 2017.

In a
previous life, she worked as a firefighter with the Baltimore County Fire
Department then did a very brief (and not very successful) stint at bartending
in east Baltimore, and finally served as the Director of Retail Operations for
a busy Civil War non-profit.

Lisa
currently lives in Maryland with her husband and two sons (who are mostly
sorta-kinda out of the house), one very spoiled Border Collie, two cats with
major attitude, several head of cattle, and entirely too many chickens to
count. When she's not busy writing or chasing animals, she's cheering loudly
for her favorite hockey team, the Washington Capitals--or going through
withdrawal and waiting for October to roll back around!

Posted by Elisha German at 6:29 PM