Hot off the presses! THE HEATSTROKE LINE by Edward L. Rubin is available now! 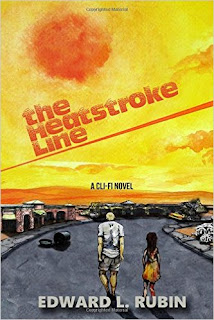 Nothing has been done to prevent climate change, and
the United States
has spun into decline.   Storm surges have made coastal cities
uninhabitable, blistering heat waves afflict the interior and, in the South (below
the Heatstroke Line), life is barely possible.  Under the stress of these
events and an ensuing civil war, the nation has broken up into three smaller
successor states and tens of tiny principalities.  When the flesh-eating
bugs that inhabit the South show up in one of the successor states, Daniel
Danten is assigned to venture below the Heatstroke Line and investigate the
source of the invasion.  The bizarre and brutal people he encounters, and
the disasters that they trigger, reveal the real horror climate change has
inflicted on America.

They were in some sort of garage,
with several other vehicles and various pieces of equipment scattered
around.  The two men who stood beside
them, watching, were the ones who had taken him out of the auto-car, one white,
one black, both very big.  Three people
approached from a doorway to Dan’s right.
In front was an attractive woman with blond hair, wearing an elegant

leopard print dress and the long, pointed shoes that were the latest fashion.  Behind her stood a man and a woman, both much
bigger, and dressed in work clothes like the two men who were guarding them.
The woman
in the leopard dress looked at her wristlink, then at Dan and Stuart, and
smiled at them in self-satisfied manner.
She motioned to the woman beside her and then to one of the two guards,

and they led Stuart, still complaining about his arm, through the doorway they
had come from.  Then she turned toward
Dan and motioned to the man beside her and the other guard, who grabbed Dan’s
arms and started to lead him toward the same doorway.
“Who the
hell are you?” he said, trying to turn toward the woman.  “Are you aware that we’re part of a
diplomatic mission from Mountain America
to Jacksonia authorized by President Peter Simonson?  I don’t know what you’re trying to do, but if
you - - - “ 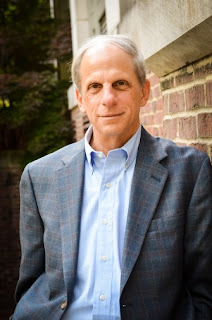 Edward Rubin is University Professor of Law and Political
Science at Vanderbilt University.  He specializes in administrative law,
constitutional law and legal theory. He is the author of Soul, Self and Society:  The New
Morality and the Modern State
(Oxford, 2015); Beyond Camelot:  Rethinking

Politics and Law for the Modern State
(Princeton, 2005) and two books with

Malcolm Feeley, Federalism:  Political Identity and Tragic Compromise
(Michigan, 2011) and Judicial Policy
Making and the Modern State:  How the
Courts Reformed America's Prisons
(Cambridge, 1998).  In addition, he is the author of two

casebooks, The Regulatory State (with
Lisa Bressman and Kevin Stack) (2nd ed., 2013); The Payments System (with Robert Cooter) (West, 1990), three edited
volumes (one forthcoming) and The
Heatstroke Line
(Sunbury, 2015) a science fiction novel about the fate of

the United States if climate change is not brought under control. Professor
Rubin joined Vanderbilt Law
School as Dean and the first John
Wade–Kent Syverud Professor of Law in July 2005, serving a four-year term that
ended in June 2009. Previously, he taught at the University of Pennsylvania Law
School from 1998 to 2005, and at the Berkeley School of Law from 1982 to 1998,
where he served as an associate dean. Professor Rubin has been chair of the
Association of American Law Schools' sections on Administrative Law and
Socioeconomics and of its Committee on the Curriculum. He has served as a
consultant to the People's Republic of China
on administrative law and to the Russian
Federation on payments law. He received his
undergraduate degree from Princeton and his law degree
from Yale.
.
He has published four books, three edited volumes, two
casebooks, and more than one hundred articles about various aspects of law and
political theory. The Heatstroke Line is his first novel.

Visit us at www.PumpUpYourBook.com
Posted by Elisha German at 12:53 PM