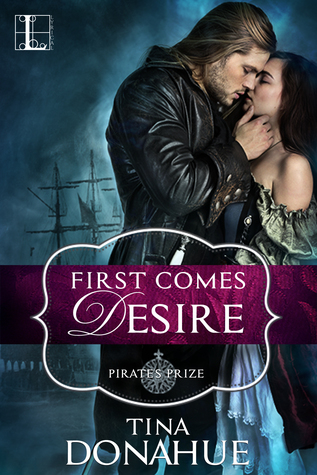 ***For Mature Audiences Only***

On a lush, secluded island, one passionate adventure leads to another….

Diana Fletcher means business. The beautiful, innocent, reverend’s daughter has traveled all the way to a tropical island off Madagascar on a mission: To find her brother—and to punish the man who drove him to a life of piracy. But when she comes face to face with the enemy in question, the handsome, powerfully seductive man is not at all what Diana expected…

Tristan Kent never intended to harm Diana’s brother. A man of humble origins, Tristan claims he tried to save him from another ruthless captain. Diana is desperate to believe he is telling the truth…and that the intoxicating desire that escalates between them is true as well. But can she trust him? Or is Tristan’s story—and his heart—nothing more than fool’s gold? Amid the haze of sensual delights and soaring ecstasy Tristan has in store for her, all will be revealed…

Review:
This read was most definitely, without a question - out of my comfort zone.  I have made it known that romance isn't my typical read. I don't mind reads with romance tossed is or it having an underlying theme but I don't tend to pick up reads where romance is the entrée. That said...
What I didn't care for was the amount of sex scenes in the book. It read as though you were rushing through a scene to get back to their bedroom. I don't care for a lot of sex in books as it is, and that may be the reason I tend to stay away from romance books...
It makes sense if the sex scene plays into the already-unfolding-scene or enhances the scene. My last negative thing about the book, I had to chuckle at some of the authors choice of words which I'm sure she may have meant to give the reader a smile aside from being descriptive (for example, the wording she used to describe his...man parts - trying to be PG here!).
What I enjoyed about the book...her writing is smooth and cohesive. She has a lot of potential, skill, and talent in her creativity and writing. Aside from all the steamy sex Diana and Tristan are having, there is a story-line and plot that was intriguing and I wish I got to read more about.  I did get a good chuckle at how fast he decides he wants to marry her; especially with how he first comes to meeting her. The scorned-ex-lover thing is cliche, however, Donahue freshens it up a little with their unique personalities and the fun twist of Diana being there for her brother, not a man. Lastly, I haven't read any pirate style books that I recall until this one. Adding that gave the book a fun and exciting element!

Excerpt:
Tristan brushed his lips against hers, teasing, testing. Diana softened beneath him, proving what he needed to know.

Gently, he eased his tongue into her mouth. The world spun, her thrilling heat snatching his breath and thoughts. He explored her intimately, deepening his kiss. Her taste soon belonged to him, his to her. They were no longer separate. He hoped she’d suckle him and deliver pleasure.

She resisted briefly, then coaxed his tongue deeper into her mouth. Pleased beyond belief, he released her wrists, slid his hands over her palms, and laced their fingers.

She yielded fully. She smelled like an English spring, soft rain mixed with fragrant flowers. He didn’t finish their kiss until she smelled of him. Slowly, he withdrew his tongue, lifted his head, and struggled for breath. “Open your eyes.”

Arousal brightened them, her mouth still wet with him, lips slightly bruised from his impassioned kiss.

His spirits soared. “You desired that.”

As a clergyman’s daughter, she was a poor liar and would never fool him. “Then I’ll have to continue until you do.”

He kissed her, tenderly at first, then hard and greedy. She whimpered in what sounded like pleasure but held back, not giving herself fully. Finally, she tore her mouth free.

He pressed his lips to her neck. Her breath spilled out on a contented sigh, telling him what words never could. “I’ll not deliver you to Bishop. You belong to me.”

You can find Tina here:

Posted by Elisha German at 2:57 AM